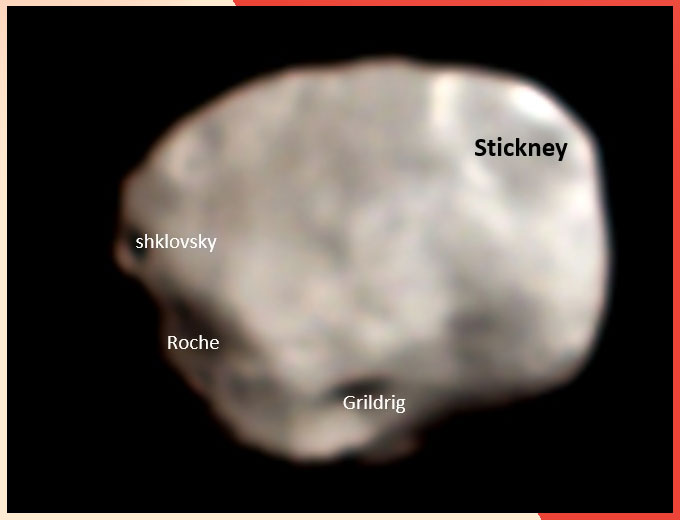 Phobos which is 7,200km away from Mars was captured Mars Colour Camera on board Mars Orbit Mission

India’s space agency, ISRO has caught and released images of the clostest and the biggest moon of Mars known as Phobos.

These images were captured by Mars Colour Camera (MCC) onboard Mars Orbit Mission. These pictures were clicked on July 1 when MOM was 7,200Km away from Mars and from Phobos, its distance was 4,200km.

ISRO said “Spatial resolution of the image is 210 m. This is a composite image generated from 6 MCC frames and has been color corrected.”

This mysterious moon of Mars is made up of carbonaceous chondrites.

“The violent phase that Phobos has encountered is seen in the large section gouged out from a past collision (Stickney crater) and bouncing ejecta. Stickney, the largest crater on Phobos along with the other craters (Shklovsky, Roche & Grildrig) are also seen in this image.” ISRO added.

A recent image of the mysterious moon of Mars, Phobos, as captured by India's Mars Orbiter Mission

Clicking of this picture was possible all due to Mission Mangalyaan. The motive of this mission was to analyse the surface of Mars and its composition along with examining Mars’ atmosphere for methane.

This mission was supposed to last for six months but ISRO clarified that it has enough fuel capacity to last for many years.

Thu, 06 Aug 2020 06:56, by: Staff Reporters
Situated in Western Himalayas of the Ladakh area, the air terminal fills in as the principle air terminal of Ladakh.

Thu, 06 Aug 2020 06:56, by: Staff Reporters
A maximum of 2,50,000 students are eligible for the qualifying procedure as after this limit is touched, no more applications will be accepted.

Thu, 06 Aug 2020 06:38, by: Staff Reporters
The Central Industrial Security Force has now assumed control over the security of Leh's Kushok Bakula Rimpochee Airport as now over 180 personnel will be looking to maintain peace in the terminal.