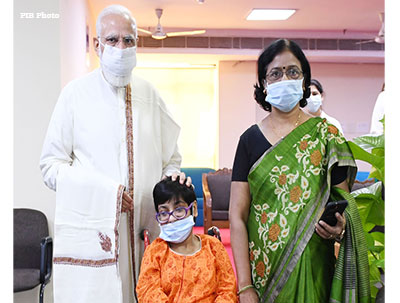 "India scripts history. We are witnessing the triumph of Indian science, enterprise and collective spirit of 130 crore Indians. Congrats India on crossing 100 crore vaccinations. Gratitude to our doctors, nurses and all those who worked to achieve this feat," Prime Minister Narendra Modi tweeted.

To commemorate the momentous event, the central government has also scheduled major celebrations at the Red Fort in the national capital.

PM Modi visited a vaccination centre at Delhi's Dr Ram Manohar Lohia hospital shortly after the milestone was reached, where he engaged with health workers and vaccine recipients.

"The country is close to making vaccine century. To be part of this golden opportunity, I appeal to citizens who are yet to be vaccinated to contribute to this historic golden vaccination journey of India by getting vaccinated immediately," Mandaviya had said in a tweet in Hindi on Wednesday.

Upon the administration of the billionth dosage, the government will make announcements on aircraft, ships, metros, and train stations.

Amit Shah, the Indian Home Minister, Arvind Kejriwal, the leader of the Aam Aadmi Party, and Congress politician Shashi Tharoor all went to Twitter to congratulate India on its vaccine success.

Meanwhile, Dr Krishna Ella, Chairman and Managing Director of Bharat Biotech, expressed his pride in the company's role in the historic event.

"This is a unified effort of the government, vaccine manufacturers, healthcare workers and all the vaccinated citizens, making it a true success story of Atmanirbharta," he said.

In a press release issued on Thursday, the Indian Medical Association (IMA) praised Prime Minister Modi and the administration for their achievements. The IMA also complimented the Ministry of Health's coordinated efforts in reducing the pandemic's death rate below 1.4 per cent.

"India being one of the largest base for vaccine production for COVID-19, IMA has leaped forward to help the Centre again by providing one million vaccination to people free for cost,"  said the press release.

India also got lauds from International leaders and organisations.

The US Embassy in India praised the government's efforts to provide immunisation to the general people to combat the epidemic.

"Congratulations to India on administering its 1 billionth dose of COVID-19 vaccine today, a major milestone in the world's efforts to combat the global pandemic," the embassy said in a tweet.

PM Modi was also praised by Israel's Prime Minister, Naftali Bennett, for the effective administration of vaccinations to more than 1 billion people in India.

In his tweet, Bennett stated that "The life-saving vaccines are helping all to defeat the pandemic."

Even when India achieves an immunisation milestone, the gap between those who have got both doses and those who have only had one jab remains significant. According to the Cowin website, around 75 per cent of all people have got the first dose of the vaccine, with approximately 31 per cent receiving both doses.

Fri, 30 Dec 2022 00:02, by: Staff Reporters
In India negative RT-PCR will be required for the traveller coming from China, Hong Kong, Japan, South Korea, Singapore and Thailand from January 1.